San Francisco and Silicon Valley, the Land of Opportunity

At the beginning of May, I came to San Francisco as part of the Lnd2Sfo Group organised by Jack Gavigan with the purpose of helping UK entrepreneurs make connections and build their network in Silicon Valley.

Jack Gavigan did a great job as the host of a 5-day visit to San Francisco and around Silicon Valley. We had the opportunity to meet with different entrepreneurs and VCs at different stages of development, from those who had recently arrived to the area to those with successful businesses and involvement in several ventures.

The visit also included presentations from supporting organisations such as the British Consulate and Orrick. These were very helpful to those planning to stay and do business here.

In this post I will summarise the activities and mention the people and locations that we visited during our tour.

I also want to thank the different participants who gave their time to meet us and make our introduction to the area a great experience.

Our trip started at the British Consulate on a very nice sunny day. We were lucky to have this weather for most to the week. The British Consulate hosted our meetings for the day. Helen Moore and Alexandra West introduced us to the general business environment of San Francisco and Silicon Valley.

The Unicorn Club is the name for startup companies with valuations over a billion dollars. San Francisco is “home of unicorns” such as Twitter and Uber. Silicon Valley leads as the top region for Venture Capital in the World.

Olivia Lee from Minami Tamaki gave us an overview of the non-immigrant visas for entrepreneurs. There are several types but the preferred types are O-1, L-1, and E-1/E-2. Olivia has been helping many of the Uk entrepreneurs with their work visas.

Jenna Anians from Tribesports gave us a detailed account of her experience setting up the US office for her company. For example, the recommended bank was the Silicon Valley Bank. She mentioned that living expenses in San Francisco are 30% higher than in London.

In the afternoon we met with Paul Carr, editorial director of PandoDaily, at the Four Seasons Hotel. He recommended to work hard and be serious with our projects. Given the high rewards at play, people here gravitate around committed, well-prepared and smart teams. He also mentioned the pressures of keeping journalism honest in a location with very wealthy and powerful people.

In the morning we started at Money Inferno led by Shaan Puri. He was keen to point out that showing traction has become an important element to get VC funding. Hence, among several other things, his team works on a custom platform to measure and improve traction of new products. The new version of Bebo is currently one of his products.

For lunch we went to the Daily Grill with Andrew Brackin who is a Thiel Fellow. Instead of a traditional education, the Thiel Fellows learn by doing with the support of prestigious mentors. He is helping Jobr to scale, which is a leading mobile jobs app that uses your LinkedIn profile to surface amazing jobs for you.

In the afternoon, we went to CloudFlare and met the CEO Matthew Prince. CloudFlare is one of the Unicorn companies, valued at more than 1 billion, with 120 people with 80% of those being engineers. CloudFlare provides a content delivery network and distributed domain name server system.

He considered the community around the product a key competitive asset. CloudFlare clients are happy to wear the company's t-shirt and be part of its community of webmasters. He also stressed the need for companies to solve real problems.

At night, we attended an event in Galvanize and heard from Heidi Rozen. Her story is how she achieved success in the VC industry run by men. She is a great speaker with tons of tips for entrepreneurs. Among those tips is the top 5 list of what a VC wants from an entrepreneur's pitch:

On Wednesday morning we were based at Orrick where we met Amanda Galton and Shawn Atkinson. They explained the benefits of being an entrepreneur supported by Orrick. Funding term-sheets are written by VCs so it is important to have a strong partner for the complexities of these deals. In this nice office we took a picture of our cohort. We were a small group so we had a lot of invaluable conversations on our particular plans with our hosts during the week. 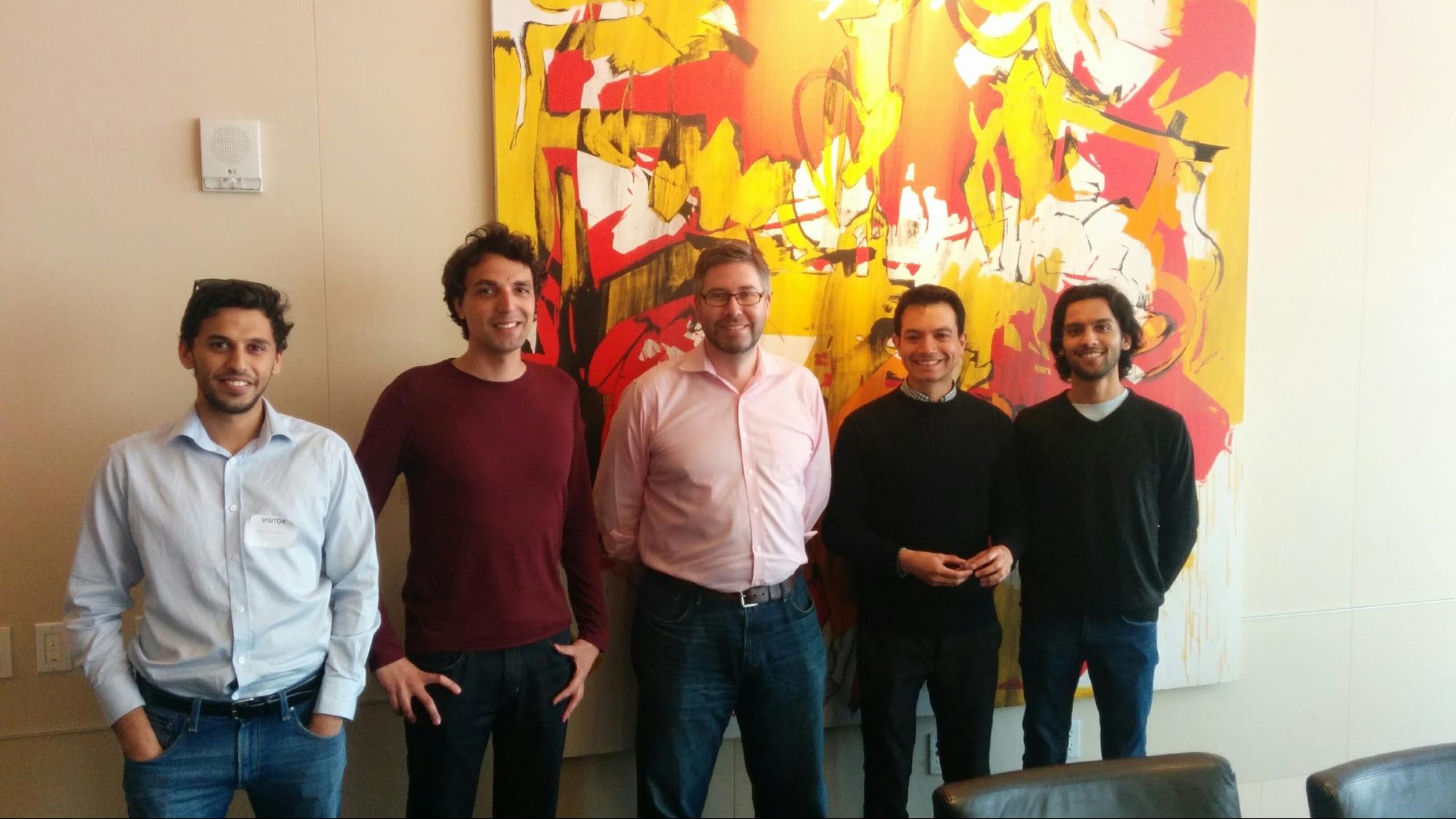 Duncan Logan from RocketSpace was next and shared with us the story of Uber which was based in RocketSpace and sat across his office when they were just a group of seven people. He suggested that we should read the Ferguson’s Formula for leading teams.

RocketSpace is also focusing on corporate innovation, consulting for corporates that need to understand how startups work, how to work with them, and how to work like them.

Next was Phil Black from True Ventures. True Ventures has funded companies such as PuppetLabs, MarketBot, Npm, KISSmetrics and Spree Commerce among others. He believes that the engineering talent is the lifeblood of the company and that having a technical co-founder is a must.

He points out that 'San Francisco is like Florence in the Renaissance' and that all the indicators are pointing to more growth in the area. VC funding is also moving downwards, an interesting trend documented in a New Yorker article.

In the afternoon, we visited SoftTech and we met Andy McLoughlin, founder of Huddle. He was in his first few weeks after becoming a venture partner, although he already has a strong profile in Angel List.

He started helping friends with some cash and had invested in many innovative SaaS businesses like Apiary, Tray.io, Bugsnag, Rolepoint, Buffer, Intercom, Import.io and Pipedrive, as well as logistics and commerce plays including Postmates, Secret Escapes and Zesty.

In the evening, we visited the LinkedIn office in San Francisco to attend a panel on Product Design with people from LinkedIn, Google, Facebook and other consultants and startups.

On this day we visited Palo Alto, and we started by meeting Keith Teare in his house. He is a serial entrepreneur who funded Easynet, RealNames and TechCrunch among others.

He likes to build world-changing businesses and shared with us his thoughts to identify opportunities of this size. His suggestion is to develop a story about a-not-so-distant future that can be told convincingly and supported by some early product traction.

His current project is Chat Center, launched in 2014, a simple and mobile way for anyone to chat. He believes that the global messaging chat system is broken and this is the solution.

Next we visited WePay, a Y Combinator startup (2009), and met co-founder Rich Aberman. He gave us a tour of the company and we had an engaging discussion about the different challenges that needed to be solved to make a startup successful.

As part of the discussion, he clarified that Uber and Airbnb have large payment teams as they were basically custom payment platforms that need to deal with the complexities of regulation since they collect money and pay third parties.

After lunch we visited the StartX accelerator where we met with Sten Tamkivi, founder of Teleport in 2014.

His application optimises the location of startup people since companies can operate remotely, taking advantage of better locations for different types or work. He mentions that for a startup it is attractive to get more 'technology done by the dollar' by developing outside the Valley and San Francisco.

From his experience as entrepreneur in residence at Andreessen Horowitz, he highlights that the entrepreneurs should pitch for a specific partner rather than the firm, since investments are very personal decisions.

We ended the day back in San Francisco at the Mars Bar, where we organised an open event for anyone who had an interest in talking to us. Personally, I met a friendly developer who introduced me to several Hacker Spaces in the city as well as other meetups that do not seem to be advertised publicly.

We started our day with lunch at Zesty, a Y Combinator startup (2014), meeting the founders Chris Hollindale and David Langer.

They emphasised that a lot of determination is needed at the start. They believe that it is better to start in San Francisco than in London because after dominating the UK market all companies come to the USA. So it is best to start in the USA from the beginning.

They also described their process to test their assumptions and how they pivoted from a B2C model to B2B model which has got traction. They keep a close eye on their weekly business performance and have started to build their team locally.

Our last destination was in Mountain View at the Hacker Dojo, a community of hackers and startups where we hosted a small event.

Based on his experience, he offered us his view on our particular businesses. He mentioned that the benefit of working for a VC was that he had access to all the competitors in a specific sector, so he could see the market as a whole. As a founder, we are limited to our particular view of the market.

He mentioned that technology is used to extract inefficiencies of the current systems. So a new player has guns and tanks while the incumbents are attempting to protect their industry with arrows and swords.

The last person we met was Eric Stern, who was employee number one at WePay, and was the lead engineer.

He stressed the need for good software practices such as testing and continuous integration and proper technical decisions based on experience to enable systems that can expand to new functionality while maintaining speed to market.

He gave us an overview of the Ruby on Rails marketplace in the area and the challenges of working in a growing business powered by technology.

Finally we joined the Hacker Dojo community, listened to lightning talks and enjoyed the happy hour before returning to San Francisco.

The week after, now on our own initiative, we visited the Computer History Museum, Y Combinator, the Google Office, the Facebook Office, and Stanford University.

Jairo is the founder and managing director of CodeScrum Ltd - a company dedicated to creating user centric digital services and products. Our clients include government agencies, newspapers, universities, retail businesses, charities and leading startups.
Related posts
Running and Scaling our Rails Starter \'Template\' In Docker With Docker Compose
Our Rails Starter \'Template\'
How to Go from a Monolith to a Microservices Architecture
Elasticsearch, Rails and Mongoid
How to use Middleware in NodeJS (ExpressJS example)